The following article appeared in the December 31, 2001 edition of the BORNEO POST online.

KOTA KINABALU: Thirty-five years after graduating from the old Serdang Agriculture College, now Universiti Pertanian Malaysia (UPM), the class of 74 and 75 alumni may finally be given an opportunity to don the “square hat” in a convocation ceremony.

Dr Mohd Noor who was then the Share Farm director of Serdang Agriculture College, and later appointed UPM deputy vice chancellor, was sympathetic to the grouses raised by the alumni in Sabah who attended the dinner which was held at a restaurant in Jesselton point.

The restaurant is owned by Datuk Khalid Mohd, another alumni member, who has retired from serving the plantation sector.

Dr Mohd Noor offered to help to persuade UPM to reenact a convocation ceremony, a symbolic gesture even though 35 years have passed since the alumni graduated.

An alumni member, Johnson Koh Yong Siang, told Dr Mohd Noor that their batch did not get the opportunity to have a convocation ceremony and felt robbed off the chance to have their parents witness their convocation as graduates.

“They feel they are ‘illegal’ although quite a number are director generals and politicians, and holding high positions in the government and private sector,” said Koh who is a Sabah agricultural consultant and Waterfront developer.

“So if we can have our convocation, at least our children can witness the joyous event along with our parents,” he added when bringing the matter to the attention of Dr Mohd Noor.

A majority of the attendees were graduates of the class of 74 & 75 of the old Serdang Agriculture College which was upgraded to Universiti Pertanian Malaysia in 1973.

Dr Mohd Noor earlier visited the MARDI office here to check on the projects in Sabah. He was accompanied by the Group chief executive officer Anas Ahmad Nasarudin. 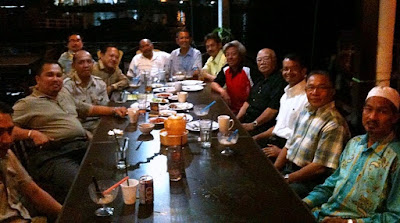 UPM Alumni−dominated company, Marditech Corporation Sdn. Bhd., organised a small gathering in Kota Kinabalu. The dinner was held at a restaurant in Jesselton Point owned by alumnus Dato' Khalid Mohd.
Present at the dinner hosted by Hj Anas Ahmad Nasarudin and Tan Sri Dr. Mohd. Noor were Ismail Salam. Hj Taha, Mohd Mohid, Koh Yong Siang, Jamaluddin Abu Bakar, Abd. Rahman Haron, Suhaili Omar, Jamal Kastari and Zainal Azhar. Most of those present were from the Class of 75 and they were unanimous in their complain that their batch did not get a convocation ceremony and as such, even though many of them are Director Generals, prominent politicians and successful businessmen, they feel they are 'illegal'. Tan Sri Dr. Mohd Noor expressed his sympathy and offered to try to persuade UPM to hold a convocation ceremony for them as a symbolic gesture even though it would be 35 years later. Avenues and opportunities for business partnerships amongst alumni in Sabah were also discussed.
Contributed by Anas Ahmad Nasarudin, Class of 76
Posted by Sekretariat PAUPM at 1/01/2011 11:42:00 AM 0 comments

Promote your Page too