PAUPM will be participating in the upcoming MAHA 2010 which will be held at the Malaysian Agro Exposition Park, Serdang (MAEPS) from 26th Nov. to 5th Dec. 2010. Members who own/operate businesses related to agriculture/horticulture/agrotourism are invited to join us. For more more information email us at event@paupm.org or call 0193362445 (Hj. Jamalus).

Email ThisBlogThis!Share to TwitterShare to FacebookShare to Pinterest
Labels: Event 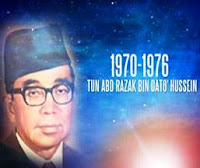 A leading Australian agricultural economist has paid tribute to former prime minister Tun Abdul Razak Hussein for his vision in promoting land development schemes and improving smallholdings in Malaysia in the 1960s."Tun Abdul Razak was a personal hero of mine," Dr Colin Barlow told the 18th biennial conference of the Asian Studies Association of Australia at the University of Adelaide in South Australia Thursday, when he presented his paper entitled "Malaysian Agriculture in Transition 1960−2010”.

Dr Barlow said soon after arriving in Kuala Lumpur in 1963 to work at the Rubber Research Institute, he realised rural agencies and research bodies lacked the weight to improve Malaysian agriculture and much had to be done.

"What was needed in this 1960s situation was to focus much more on bettering individual and group smallholdings. We needed a person with authority, having a common touch and in tune with rural people's aspirations."And we found him in Tun Abdul Razak. He became the architect of giving practical application to popular desires - a personal hero of mine." Dr Barlow said Tun Abdul Razak, the then Deputy Prime Minister and the Minister of Rural Development, was`an individual combining great vision with skills in leadership and administration.He facilitated the organisation of replanting and new land development schemes, he said.

"Tun Abdul Razak engineered major improvements to rural education and health, along with roads and other infrastructures, proceeding in the 1970s to pioneer wider national transformation through the New Economic Policy," he said.Dr Barlow, who has been involved in rural development for many years, especially in Malaysia, Indonesia, the Philippines and Sri Lanka, told the Adelaide conference "a further crucial initiative" of the 1960s in Malaysia was the establishment of the Federal Land Development Authority (Felda), which was fashioned after difficult beginnings into a highly successful body".

This opened up and managed many new planted areas, first under rubber and later oil palm, he said. A crucial key to Felda's success was Tan Sri Raja Muhammad Alias Raja Muhammad Ali, a person who worked in the organisation for 35 years and was chairman for almost half that time. He was an effective and a visionary leader and administrator, without whom the giant social enterprise was quite likely to have faltered and failed," Dr Barlow said.

He said former prime minister Tun Abdullah Ahmad Badawi had pre-dispositions towards developing agriculture and achieving socio-economic equity while his predecessor Tun Dr Mahathir Mohamad tended to emphasise the development of manufacturing and the IT sector. Dr Barlow, who has a deep attachment to Malaysia, said he was looking forward to Prime Minister Datuk Seri Najib Tun Razak's New Economic Model, cited as the route to Malaysia becoming a high-income nation.

"I profoundly hope it leads to Malaysia's continuing success," he said.

He said Malaysian agriculture, which has been described as a "third engine of growth", has potential for further expansion, but it depended on the intentions of future governments.

Dr Barlow has written several books on Malaysia, his most recent book was titled "Malaysian Economics and Politics in the New Century" (Edward Elgar, 2003, edited with Francis Loh Kok Wah).

Email ThisBlogThis!Share to TwitterShare to FacebookShare to Pinterest
Labels: Viewpoints 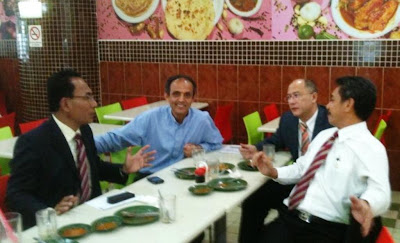 UPM Alumni icon entrepreneur Dato Aziz Bakar (Air Asia) with Tuan Syed Zikri (ECERDC) and Dr. Hauiruddin (Qzen) discussing another possible business opportunity. The teh tarik joint at Daya Bumi happens to be the meeting place for Dato Aziz and Dato Seri Tony fernandez to incubate the idea Air Asia as a low cost airline, and now a national success story. We pray the success of Air Asia rubs onto any venture PAUPM members embark on.
Anas, Class of 76
Posted by Sekretariat PAUPM at 10/13/2010 07:17:00 AM 0 comments

Email ThisBlogThis!Share to TwitterShare to FacebookShare to Pinterest
Labels: General 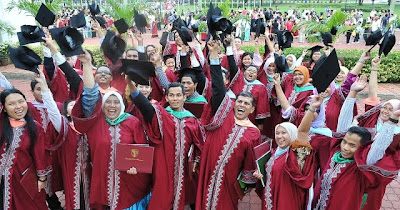 On the occasion of the 34th Convocation of Universiti Putra Malaysia, the President, membes of the Executive Committee and members of PAUPM extend heartiest congratulations and warmest welcome to the Class of 2010.
Posted by Sekretariat PAUPM at 10/07/2010 04:49:00 PM 0 comments

Promote your Page too